Posted on March 2, 2011 by Operation Gratitude

A gift to Operation Gratitude by Guest Blogger Virginia VanGelderen

The “Creative Learning Class” at East Hall Middle School, Gainesville Georgia, (severely and profoundly handicapped) made a few fleece scarves for sale to generate funds to support special supplies for the class. These were displayed for the staff to see and purchase. Around Christmas time I got an idea. I would put in an order with the class to make enough for me to send a scarf to a U.S. soldier in Afghanistan in each one of my colleagues’ names. I ordered 16 scarves. The students helped cut and stitch the scarves in their class with assistance from their teachers. When they were finished, I attached a teacher’s name on each and had my 7th grade language arts class write letters to go with them. This was appropriate as they study the Middle East in their Social Studies Class.

I also related a personal story to my students about how my husband aided a soldier, a stranger to him, home on leave, who had lost her cell phone near our home. After helping her find it, she sent him a gift and letter of thanks saying she and her husband had a renewed faith in serving as soldiers for their country thanks to people like him who care enough to help a stranger. She said they were being deployed to Afghanistan.

So the little effort grew and grew as students and teachers became involved in this Christmas spirit. Since the  scarves took some time to make, the gifts didn’t make it to the soldiers in time for Christmas, but we all hope their hearts were warmed by knowing we support them.

One teacher, in whose name  a scarf was given, responded by telling me he was grateful for this gift. He said it was “the best gift he got for Christmas from a colleague”.

Here are pictures taken during the scarf-making process in December and January. 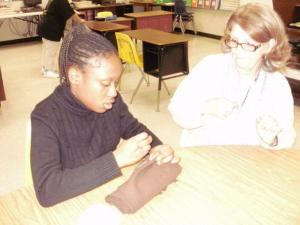 (Mrs. Lisa Martin and students from the Creative Learning Class).

The Language Arts students are hoping to receive a letter back from any soldiers that might have time to write.

Operation Gratitude annually sends 200,000+ care packages to Veterans, First Responders, New Recruits, Wounded Heroes, their Care Givers, and to individually named U.S. service members deployed overseas and their families waiting at home. Each package is filled with food, entertainment, hygiene and hand-made items, as well as personal letters of support. Our mission is to lift the spirits and meet the evolving needs of the Military and First Responder communities, and provide volunteer opportunities for civilians anywhere in America to express their appreciation to all who serve our nation. Each package contains donated product valued between $45 and $100 and costs our organization $15 to assemble and ship. Since its inception in 2003, Operation Gratitude volunteers have shipped more than 1.6 Million Care Packages.
View all posts by Operation Gratitude →
This entry was posted in Uncategorized and tagged care packages, charity, community service, crochet, donate, gifts, holidays, knit, Marines, military, Military care packages, Military support, morale, Operation GRatitude, Patriots, scarves, tribute, volunteer. Bookmark the permalink.